Following our last post on part (A)  Of Marine terminology,  have tried to gather more terminology use in Maritime world.

On this part B,  you are going to read more terminologies which starts with the letter B ;

To back the anchor

To carry out a small anchor ahead of the large one, in order to prevent it from coming home.

In rowing, is to impel the boat with her stern foremost by means of the oars.

To back the sails

To arrange them in a situation that will occasion the ship to move astern.

To back and fill

A place for ships to anchor.

To bagpipe the mizen

To bring the sheet to the mizen shrouds.

To contract a sail into a narrower compass, by tying up a part of it at one corner. 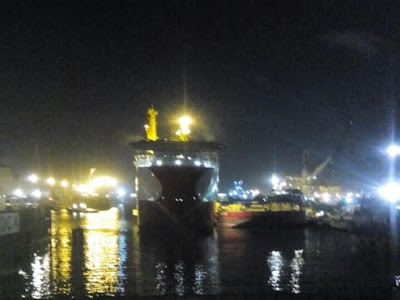 Is either pigs of iron, stones, or gravel, which last is called single ballast; and their use is to bring the ship down to her bearings in the water which her provisions and stores will not do. Trim the ballast, that is spread it about, and lay it even, or runs over one side of the hold to the other.

Bale the boat; that is, lade or throw the water out of her.

When a ship has no sail set.

A carvel built boat, that rows with ten or twelve oars.

A thin piece of wood. Batten down the hatches, is to nail batters upon the tarpaulins, which are over the hatches, that they may no be washed off.

To bear in with the land

Is when a ship sails towards the shore.

To thrust or keep off the ship’s side, &c. any weight when hoisting

To bear up or away

The act of changing a ship’s course, to make her sail more before the wind

Caulking every seam in her bottom.

The making a progress against the direction of the wind, by steering alternately close-hauled on the starboard and larboard tacks.

To intercept the current of the wind, in its passage to a ship, by any contiguous object, as a shore above her sails, as a high sea behind, &c. and thus one sail is said to becalm another.

Denotes an arch of the horizon comprehended between the line of the beam and line of the keel forward.

To fasten a rope, by winding it several times backwards and forwards on a cleat or pin.

To make fast, to secure.

To bend a sail

Is to affix it to its proper yard, mast or stay.

The space contained between any two decks of a ship.

Bight of a rope

Any part between the two ends.

A narrow inlet of the sea.

To break. The ship is BILGED, that is, her planks are broken with violence.

Is that which, by reason of the flatness of a ship’s bottom, lies on her floor, and cannot go to the pump.

A kind of box to contain the compasses in upon the deck.

The station in which a ship rides at anchor, either alone, or in a fleet; the due distance between two ships; and also a room or apartment for the officers of a mess.

Very large pieces of timber in the fore-part of a ship, round which the cables are fastened when the ship is at anchor. AFTER-BITTS, a smaller kind of BITTS, upon the quarter-deck, for belaying the running rigging to.

To bitt the cable

Is to bring the cable under the cross-piece, and a turn round the bitt-head. In this position it may either be kept fixed or veered away.

The turn of a cable round the bitts.

That part of the cable which stays within-board round about the bitts when a ship is at anchor.

A piece of wood with running sheaves or wheels in it, through which the running rigging is passed, to add to the purchase.

When they cannot approach any nigher.

When two ships come so near as to touch each other, or when that lie side-by-side.

To board a ship

To enter an enemy’s ship in an engagement.

A steep coast, permitting the close approach of a ship.

The rope which goes round a sail, and to which the canvas is sewed.

Bonnet of a sail

Cleaning the upper part of a ship’s bottom, or that part which lies immediately under the surface of the water; and paying it over with tallow, or with a mixture of tallow, sulphur, resin &c.

The situation of a ship sailing right before the wind.

A frame of old rope or junk, laid out at the bows, stems, and sides of ships, to prevent them from being injured by flakes of ice.

Lines made fast to the cringles in the sides of the sails, and to which the bow-line is fastened.

Lines made fast to the bridles, to haul then forward when upon a wind, which being hauled tort, enables the ship to sail nearer to the wind.

To pull upon any body with a tackle, in order to remove it.

A large piece of timber which stands out from the bows of a ship.

A particular method of veering a ship, when the swell of the sea renders tacking impracticable.

To brace the yards

To move the yards, by means of the braces.

To brace the yards round for the contrary tack.

To brace the yards to a position, in which they will make the smallest possible angle with the keel, for the ship to have head-way.

To cast off the lee braces, and round in the weather braces, to assist the motion of the ship’s head in tacking.

To haul up a sail by means of the brads.

A name to certain ropes belonging to the mizen, used to truss it up to the gaff and mast. But it is likewise applied to all the ropes which are employed in hauling up the after-corners of the stay-sails.

The act of beginning to unload a ship.

When a ship at anchor is forced, by the wind or current, from that position in which she keeps her anchor most free of herself and most firm in the ground, so as to endanger the tripping or fouling her anchor.

Burning off the filth from a ship’s bottom.

A rope employed to confine a ship sideways to a wharf or to some other ship.

To bring by the lee

See TO BROACH TO.

To check the course of a ship when she is advancing, by arranging the sails in such a manner as that they shall counteract each other, and prevent her from either retreating or advancing.

To incline suddenly to windward of the ship’s course against the helm, so as to present her side to the wind, and endanger her losing her masts. The difference between BROACHING TO, and BRINGING BY THE LEE may be thus defined: suppose a ship under great sail is steering south, having the wind at N. N. W. then west is the weather side, and east the lee-side. If, by any accident, her head turn round to the westward, so as that her sails are all taken a-back on the weather-side, she is said to BROACH TO. If, on the contrary, her head declines so far eastward as to lay her sails a-back on that side which was the lee-side, it is called BRINGING BY THE LEE.

A discharge of all the guns on one side of a ship both above and bellow.

The state of a ship which is so loosened in her frame as to drop at each end.

The sides of a ship above the decks.

Lines that come down from the top of the mast to the foot rope before the sail, and by which the bunt or belly of the sail is hauled up outwards.

Over the ship’s side.

The state of a ship when she is so unequally loaded as to draw more water forward than she ought.

The course of a ship as nearly as possible to the direction of the wind, which is generally within six points of it.
Reference:  Marine terms,  Glossary of Nautical Terms, dictionary of marine terms.
Read more about:  marine terms .  For  opinions,  please place your comments below. Thanks.