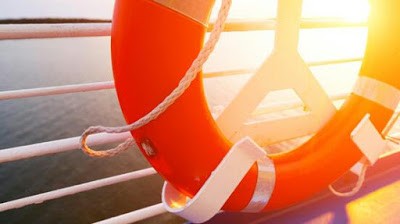 In Maritime,  we usually use some marine terminology,  in which one word can mean a long sentence.  This is because in Maritime world,  we mainly communicate via VHF and other long distance signal transmissions.  Ship been a moving object required a short and fast communication.

Below, we are going to list some Maritime words and means,  for more better understanding;
Aback
The situation of the sails, when their surfaces are pressed aft against the mast by the force of the wind.
Abaft
The hinder part of a ship, or towards the stern. It also signifies farther aft or nearer to the stern; as, the barricade stands ABAFT the main-mast; that is, nearer to the stern.
Abaft the beam
Denotes the relative situation of any object with the ship when the object is placed in any part of that arch of the horizon which is contained between a line at right angles with the keel and that point of the compass which is directly opposite to the ship’s course.
Aboard
The inside of a ship.
A board
Is the distance run by a ship on one tack: thus they say, good board, when a ship does not go to leeward of her course; a short. board, and a long board, according to the distance run.
Aboard main tack!
The order to draw the lower corner of the main-sail down to the chestree.
About
The situation of a ship as soon as she has tacked.
About ship!
The order to prepare for tacking.
Abreast.
The situation of two or more ships lying with their sides parallel, and their heads equally advanced; in which case they are abreast of each other. Abreast of any place, means off or directly opposite to it.
Adrift
The state of a ship broken from her moorings, and driving about without control.
Afloat
Buoyed up by the water from the ground.
Afore
All that part of a ship which lies forward, or near the stem. It also signified farther forward; as, the manager stands afore the foremast; that is, nearer to the stem.
Aft.
Behind, or near the stern of the ship.
After
A phrase applied to any object in the hinder part of the ship, as after hatchway, the after-sails, &c.
A ground
The situation of a ship when her bottom, or any part of it, rests in the ground
A head
Any thing which is situated on that point of the compass to which a ship’s stern is said to be a-head of her.
A hull
The situation when all her sails are furled, and her helm to the lee-side; by which she lies with her head being somewhat inclined to the direction of the wind.
A lee
The position of the helm when it is pushed down to the lee-side.
All in the wind
The state of a ship’s sails when they are parallel to the direction of the wind, so as to shake, or quiver.
All hands hoay!
The call by which all the ship’s company are summoned upon deck.
Aloft
At the mast heads, or any where about the higher rigging.
Along side
Side by side, or joined to a ship, wharf; &c.
Along shore
Along the coast; a coast which is in the sight of the shore, and nearly parallel to it.
Aloof
Is distance. Keep aloof, that is, keep at a distance.
A main
At once, suddenly; as; let go main! 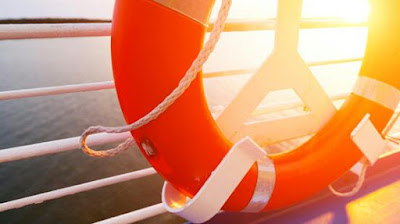 A midships
The middle of a ship, either with regard to her length or breadth.
To anchor
To let the anchor fall into the ground, for the ship to ride thereby.
Anchorage
Ground fit to hold a ship by her anchor.
The anchor is cock-bill
The situation of the anchor when it hangs by the stopper at the cathead.
At anchor
The situation of a ship riding at her anchor.
An end
The position of any mast, &c. when erected perpendicularly. The top-masts are said to be an-end when they are hoisted up to their usual stations.
A peek
Perpendicular to the anchor, the cable having been drawn so tight as to bring the ship directly over it. The anchor is then said to be apeek.
Arm the lead
Apply putty to the lower end.
Ashore
On the shore. It also means A-GROUND.
Astern
Any distance behind a ship, as opposed to A-HEAD.
Athwart
Across the line of a ship’s course or keel.
Athwart hawse
The situation of a ship when driven by accident across the fore-part of another, whether they touch or are at a small distance from each other, the transverse position of the former is principally understood.
Athwart the fore foot
When any object crosses the line of a ship’s course, but ahead of her it is said to be athwart her fore foot.
Athwart-ships
A direction across the ship from one side to the other.
Atrip
The when applied to the anchor, it means that the anchor is drawn out of the ground, in a perpendicular direction, by the cable or buoy rope.  The topsails are said to be atrip when they are hoisted up to the mast-head, to their utmost extent.
Avast!
The command to stop, or cease, in any operation.
Awning
A shelter or screen of canvass, spread over the decks of a ship to keep off the heat of the sun. Spread the awning, extend it so as to cover the deck.
Aweigh
The same as atrip.
Reference from Glossary of Nautical terms
Part (B)  ===>>Continue reading